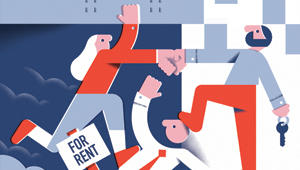 Being a New York City rental broker has always been a tough gig. But the job is getting even harder.

It’s now been exactly one year since StreetEasy began charging a daily $3 fee to post a rental listing on its site — a move that hit brokers in the pocketbook at a time when margins were already thin.

The fee — which does not seem to have dissuaded brokers from using the Zillow-owned site — is just one of several stressors that New York City rental brokers are facing.

While Manhattan rental inventory actually dropped in May compared to the same time last year, it’s generally high and concessions for renters have been rampant. That’s not to mention the fact that landlords have been emboldened by new technology, allowing them to more easily advertise directly to renters.

In addition, startup websites like Naked Apartments, which Zillow bought for $13 million in 2016, Nestio, RentHop and Flip are all among those that smell opportunity in the long-opaque corner of the market.

“It’s the perfect storm of disruption,” said Andrew Heiberger, who’s been vocal about the tight margins in the brokerage business since he stunned the industry and folded his firm, Town Residential, in April.

And the pressures are not likely to ease up any time soon.

Some predict that the sector will be drastically disrupted in the next five to 10 years, in ways that will only continue to marginalize brokers.

In addition to landlords advertising directly to consumers, offerings like flexible leasing, furnished apartments, co-living and roommate matching — now in the early stages in New York — have the potential to collectively transform what it means to rent going forward.

Clelia Peters, the President of Warburg Realty and a co-founder of the real estate tech venture capital firm MetaProp, said that in the under-$7,500-a-month range, there’s a serious question about how much value brokers will be able to add in the new landscape. That’s largely because renting an apartment at those lower price points has far more “limited life implications” than buying. Wealthier renters, she said, will always be more likely to hire a broker to do the legwork for them.

“They’re facing pressures coming from a variety of places,” she said. “I don’t think the rental brokerage model will be protected anywhere but at the high end.”

While the initial backlash to StreetEasy’s $3 rental fee was swift — the Corcoran Group and Citi Habitats said they would stop sending their feeds to StreetEasy —  many firms have covered the costs for their agents. (Even Realogy, the parent company of Corcoran and Citi Habitats, struck a multiyear deal with the site to cover the costs of posting rental and sales listings.)

Nonetheless, many are still shelling out for the service themselves.

While StreetEasy’s rental listings plummeted 55 percent to about 14,000 from nearly 31,000 shortly after the fee took effect, it has bounced back somewhat from that initial drop. As of last month, The Real Deal counted 19,000 listings on the site.

“The reality is that StreetEasy, right now, is the biggest platform. As a broker, there’s no other choice,” said Keller Williams NYC’s Stan Broekhoven.

Brokers, he said, are generally spending a few hundred dollars a month for listing fees. “You just calculate that in now,” said Broekhoven, adding that while he posts his rentals on StreetEasy, he now immediately removes a unit after it’s been rented.

But while the industry has come to accept that new reality as the cost of doing business, it translates into less take-home pay for rental brokers, who are already hustling for every dollar and reeling in smaller commissions than their counterparts in the luxury sales space.

While New York City renters have long publicly loathed having to pay brokers, landlords are increasingly catching on to the idea that they can go straight to renters.

While it’s not a widespread practice just yet, more landlords are starting to list rental properties directly on consumer-facing websites. Or in some cases, they’re testing out these sites while simultaneously tapping brokers.

Anna Krakowski, an operations manager at East Village Property Management, said her company has been using both brokers and direct listings as a way of casting the net wide.

Posting units directly allows the company to appeal to renters looking to avoid brokers’ fees, she said, though she noted that the company still gets most clients through agents.

“I’m not going to miss out on the opportunity; that’s what it comes down to,” Krakowski added. “The more exposure we get, the quicker we get these units off the market.”

Last July, Nestio, which launched in 2011 as a platform to let New York City property owners manage and track their rental portfolios online, began offering custom websites for landlords to draw in potential renters without the help of StreetEasy or other third-party aggregators.

Nestio CEO Caren Maio — whose firm has raised $11.9 million in venture money to date — told TRD last year that the impetus for creating a consumer-facing product for landlords was the discovery that more than half the traffic to their websites was occurring after hours, when leasing offices are closed.

“As a landlord, management company or broker with exclusives, it gives you the ability to more effectively brand yourself and capture a consumer directly,” Maio said at the time.

Last month, she told TRD that in less than a year Nestio has on-boarded almost 100 websites for landlords, including sites for two of Forest City New York’s Brooklyn rentals, DKLB BKLN and 38 Sixth Avenue.

With pressure on margins, brokerages have had to be more strategic about investing resources and measuring results, Maio said. Many have been adopting new tech tools as a way to attract and retain agents. They’re also bringing on more experienced brokers to stay competitive, she said. “Is it harder than it was two, three, four years ago? Sure,” Maio said of being a broker. “The seeds have been planted for many years.”

Meanwhile, other startups are targeting smaller niches of the market — like roommate matching, co-living and subletting.

One company, Roomeze, which raised $2 million in seed funding in May and is operating in Brooklyn, charges a flat $200 to connect potential roommates and provide support services to them in connection with their rental.

Meanwhile, RentHop uses an algorithm dubbed a HopScore to sort listings by quality — weeding out listings without photos or with unresponsive landlords — rather than solely by factors like price and posting date. And Joinery, which deems the rental broker “a much-reviled relic from a bygone era,” connects outgoing tenants with prospective incoming ones. When a lease is signed, the new tenant pays the old one a fee that is “typically two-thirds less than a standard broker fee.” The departing tenant gets a 5 percent fee, and Joinery receives a smaller one.

Other companies are banking on the fact that the traditional one-year agreement will soon be a thing of the past.

One of them is Flip, which serves as a marketplace for subletting, allowing users to find tenants to take over their leases or sublet the unit. And Leasebreak, which has been around for five-plus years, has a similar concept.

Peters — whose firm MetaProp announced a $40 million fund last month to back startups — said she is expecting a shift away from yearlong leases.

Citi Habitats President Gary Malin acknowledged that technology is changing the playing field, but said “we are first and foremost in a hospitality-based business.”

Brokers argue that their value lies in deciphering the complicated market and guiding renters through logistics.

Bond’s Douglas Wagner cited a young lawyer — who had just joined a firm and was making a starting salary of $180,000 — as a case in point. The client first searched for a no-fee apartment but ran into hurdles with the income and work-history requirements.

“There were all these little nuances to making a deal with that landlord that kind of shut him out,” Wagner said.

Still, he conceded that “most consumers don’t want to have a middleman” and “want to be able to self-serve.”

While the rental business may be in flux for brokers right now, for renters it’s undeniably sweet.

In April, concessions in Manhattan rose to the third-highest percentage in the past seven and a half years. The share of new leases with concessions climbed to 44.3 percent, up from 28.6 percent the same time last year, according to a Douglas Elliman market report. The median rent in Manhattan rose in May, after five straight months of declines, but the data was skewed by increased demand, fueled by the soft sales market, for larger apartments.

The trend isn’t new. Last year, the Moinian Group’s Sky complex was offering two to three months of free rent on new leases. The Durst Organization offered the same, as well as covering broker fees, at Via 57 West. The building is currently offering one month free, according to its website.

The outer boroughs haven’t been immune, either.

Brooklyn incentives cracked the 50 percent mark for the first time in April, while 65.1 percent of new deals in Northwest Queens included concessions.

In May, Manhattan rental units were sitting on the market for an average of 29 days. While that’s down significantly from 44 days in May 2017, brokers’ fees have been eroding over time.

Over the past few years, a fee of one month’s rent — or a little over 8 percent — has become increasingly standard. That’s down from the historic 12 or 15 percent, said Heiberger, who founded Citi Habitats and sold it to Realogy in 2004.

Given how much rents have risen over time, a one-month fee today is much higher than it was a decade or two ago. But it’s still a smaller percentage from the past and “seems here to stay,” he said.

Bond’s Wagner said his firm has been beefing up new systems to adapt, including basic things such as consolidating listings onto its website and allowing some things to be done online instead of in the office.

But it may be an uphill battle.

“I don’t think there will be a vibrant rental brokerage business in New York in the next five to 10 years,” Peters said. “I would be very nervous if I owned Citi Habitats right now.”