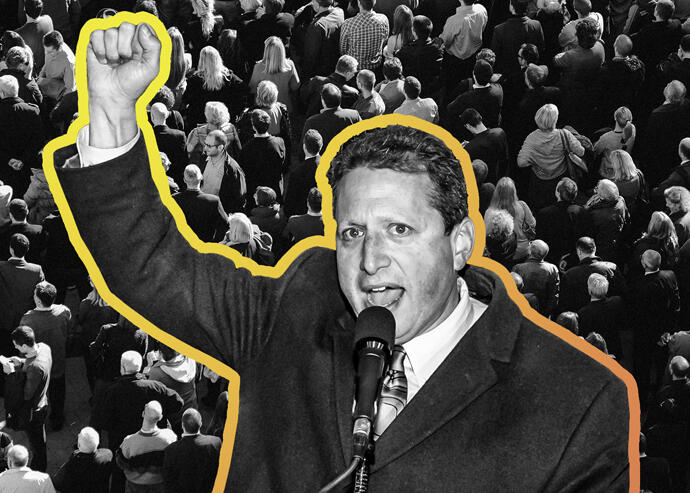 Brad Lander is now working to organize a meeting of all tenants to protest Greenbrook. (Getty)

Cassie Newsom was celebrating her birthday with her spouse and two children at their Park Slope home when she read a notice from her landlord saying that they would have to move.

The landlord, real estate investment and development firm Greenbrook Partners, had bought the 30-unit building at 70 Prospect Park West less than a week before for $15 million. The message said Newsom’s family had 90 days to vacate the apartment, which they have lived in since 2010.

“As a courtesy, we wanted to notify you that leases will not be renewed at 70 Prospect Park West,” read the notice, which was emailed to tenants. “While we realize this may not be ideal, the upcoming months provide an opportunity to rent apartments at discounted pricing.”

Newsom said she felt scared and anxious at the thought of moving. “This is the only home our kids have ever known,” she said.

She isn’t alone. Many of her neighbors, as well as tenants in at least two other buildings owned by Greenbrook Partners, received similar notices in recent months.

Now, those tenants and local City Council member Brad Lander are discussing their options, including legal action and a campaign to get the landlord’s blue-chip investors to pull their funding.

“This is predatory disaster capitalism,” said Anh-Thu Nguyen, who has lived at 70 Prospect Park West since 2009 and was also notified that her lease would not be renewed.

Greenbrook is led by Greg Fournier, formerly of East End Capital and the U.S. real estate division of the Olayan Group, and Fred LeCao, whose resume includes executive roles at BlackRock and national lender UC Funds.

The privately held company invests in “underperforming, poorly maintained, mismanaged and undercapitalized” properties in New York City, with a focus on neighborhoods experiencing rapid growth and change, per its website. It’s been on a buying spree since mid-2019, purchasing at least 29 properties for a total of $160 million, according to a March analysis by PincusCo Media. The report cites an unnamed source who claims Greenbrook’s real spend is closer to $300 million across as many as 80 deals.

In December, NW1 announced it secured a $100 million commitment from the Texas Permanent School Fund, a sovereign wealth fund with investments valued at $22.7 billion as of last August that was created to benefit public schools in the state.

In an interview with Bisnow, Beanblossom described the commitment as a “catalyst” for the firm, which focuses on investing in smaller properties than is traditional for institutional investors.

The first strategy NW1 is pursuing is to buy up small, run-down multifamily buildings in Brooklyn to fix up and flip. The firm estimated its Brooklyn-based multifamily portfolio could grow up to $150 million. Its local partner executing that strategy is Greenbrook.

This isn’t the first time Greenbrook’s management style has come under fire. Last summer, one of its commercial tenants called the firm “incredibly unyielding” in the Wall Street Journal after trying to negotiate a pandemic rent break. The tenant, a spa owner, later closed her business, and Greenbrook sued for $300,000 in unpaid rent, the Brooklyn Paper reported.

Now, residential tenants are coming out of the woodwork. At least six tenants in three different Park Slope buildings acquired by Greenbrook received notices of non-renewal in recent months, according to interviews and documents viewed by The Real Deal.

“This is a business strategy that is rooted in sociopathy, the absolute disregard for other people,” said Adam Gaynor, who runs a consultancy that advises nonprofits and has lived at 70 Prospect Park West with his wife since 1999.

Gaynor and his wife, who have two small children, have been “panicking” since late March, when they received Greenbrook’s notice to vacate their three-bedroom unit in 90 days. Neither spouse is vaccinated and they are scrambling to find housing nearby to remain close to family members.

All of the tenants that received notices to vacate live in what are ostensibly market-rate units, therefore Greenbrook is not breaking any laws by refusing to renew leases. But the tenants said they are researching their building and unit histories to see whether illegal deregulation occurred under a previous landlord. Tenants at 70 Prospect Park West have retained a lawyer to explore their options.

Some tenants also reached out to Lander, who is now working to organize a meeting of all Greenbrook tenants to lobby the Texas Permanent School Fund to withdraw its commitment to NW1 and, by extension, Greenbrook.

“We’re going to fight it at the investor level,” he said in an interview. “The state of Texas, or the teachers of Texas, should not engage in behaviors that are designed to evict people.”

Newsom, who worked in Houston’s public school system for five years before moving to New York, is planning to personally write to the agencies that oversee the fund. “I come from a family of teachers,” she said. “Maybe they don’t know the full picture of what Greenbrook is doing.”

The Texas Permanent School Fund did not respond to a request for comment.

Even the landlord lobby has frowned upon Greenbrook’s approach. Jay Martin, who runs the Community Housing Improvement Program, said he remains opposed to any legislative action that would prohibit landlords from refusing to renew a market-rate lease or increasing rents. However, he has advised members not to issue notices of non-renewal of leases during the pandemic. (Greenbrook is not a CHIP member.)

“[In a pandemic], it’s probably not the best policy,” he said. “But the owners should have that right in the long term.”

“We are investing in and improving housing opportunities for New Yorkers while other investors have fled,” he wrote in an email. “For the record, NW1 does not, nor do any of its investors, own 70 Prospect Park West.”

However, Beanblossom did not respond to questions regarding which buildings bought by entities connected to Greenbrook are part of NW1’s Brooklyn portfolio, and whether leases are being renewed at those properties.

A spokesperson for Greenbrook said the company remains “excited” to refurbish 70 Prospect Park West but broached the possibility of renewing leases.

“We are hopeful that we’ll be able to constructively work on a case-by-case basis toward a mutually beneficial solution with our tenants, including options for lease renewals,” a spokesperson wrote in a statement. “We encourage residents to get in touch and look forward to those discussions.”

Nguyen said that was news to her and her neighbors. She said that she requested to renew her lease but did not hear back from Greenbrook, apart from a reminder to pay May’s rent.

“We’ve already gotten in touch with them,” she said. “I did not leave New York City during this pandemic, because this is my home… and I am here to stay.”