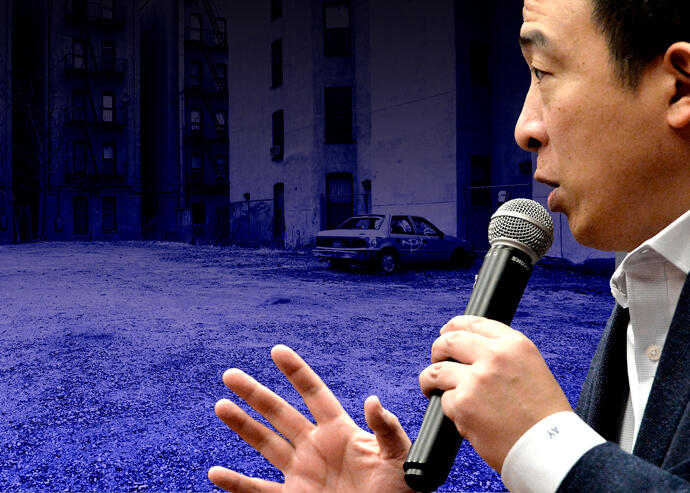 The contender for mayor announced a plan Thursday to hike taxes on empty commercial lots by 500 percent over five years, the New York Post reported. The idea is to kickstart development but Yang estimated the plan could rake in $900 million a year for the city.

Vacant commercial land is taxed based on a valuation of less than 20 percent of what it would actually sell for, which Yang said disincentivizes development, the Post reported. By taxing properties on their sales price, he argues, the city would rake in cash and encourage owners to build.

With at least $1.3 billion in property taxes unpaid, and commercial building valuations (and tax bills) plunging during the pandemic, the plan would be timely, Yang said.

But developers and trade groups are skeptical, arguing the tax would make properties more expensive to build out.

“The city’s property tax system is fundamentally broken and we agree with Andrew Yang that it needs comprehensive reform, but this idea will not help to achieve that goal,” James Whelan, president of the Real Estate Board of New York, told the Post.

Martha Stark, who was finance commissioner under Mayor Michael Bloomberg, thinks Yang could be on to something but that his math is off. She estimated the plan would raise closer to $500 million.

Yang’s plan is hardly novel; tax surcharges on vacant land, storefronts and homes have been proposed for years, but never enacted.