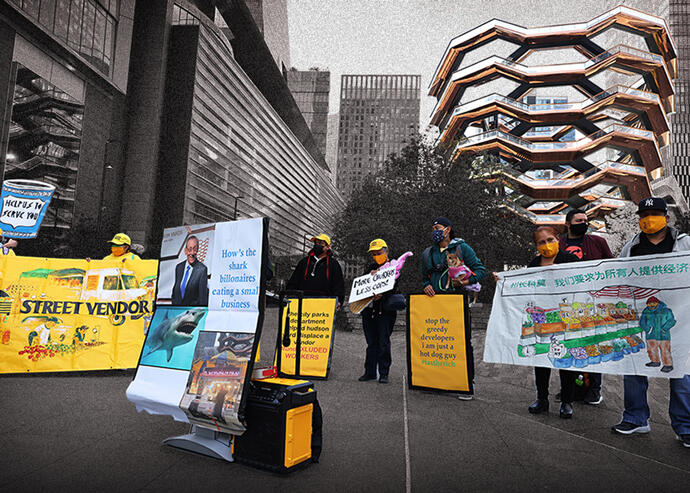 Protestors in support of street vendors gather in Hudson Yards on May 7, 2021 (Getty)

Restaurants inside the Hudson Yards mall have struggled through the pandemic, but now a food fight has erupted outside, pitting street vendors against developer Related Companies and the city.

This week, the situation escalated when police officers issued tickets, alleging the sellers were illegally operating on sidewalk space smaller than the mandatory 12 feet, according to the Street Vendor Project.

“We need more churros, less cops,” said Assemblymember Jessica Gonzales-Rojas, who also took part. One of the protester signs read: “Save vendors spot from shark billionaires,” another had a photo of Related Chairman Stephen Ross, sounding a similar theme. And another showed a photo of Mayor Bill de Blasio, asking him to “End the tale of two cities now!”

In a statement, a Related spokesperson said “vendors must operate legally and safely, and the city has clear regulations that they enforce to ensure everyone is following the law.” The statement added that Hudson Yards, the High Line and the surrounding area “experience extraordinary visitation and as a result, public open space needs to be managed for pedestrian safety and FDNY access.”

The NYPD also released a statement, saying “officers gave repeated warnings over the course of a week to vendors blocking the pedestrian walkway at Hudson Yards. Those officers are dedicated to helping local businesses emerge from the ongoing Covid-19 pandemic and they tried to work with vendors to address the issue.” The statement added that after “warnings went unanswered, four summonses were issued.”

The Street Vendor Project said a map of the grounds — which it shared with The Real Deal — shows the sidewalk space is 13 feet wide, a foot wider than the requirement. The organization also said the NYPD should not have intervened, given that the mayor shifted enforcement over to the Department of Consumer and Worker Protection in January.

A representative for the mayor’s office did not immediately respond to questions regarding police enforcement authority.