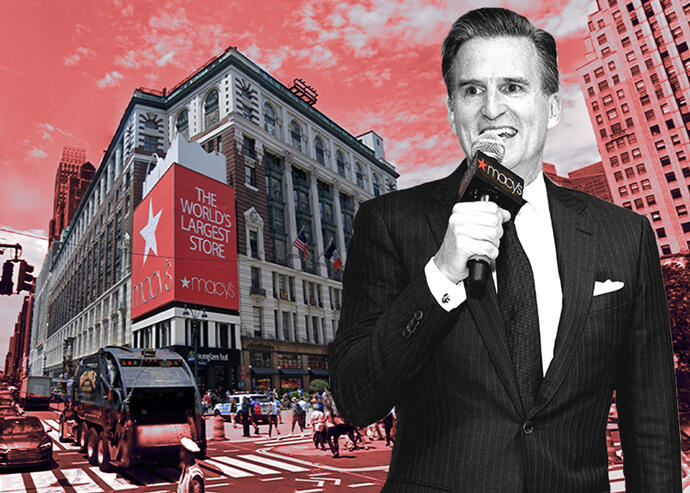 Macy’s is pushing ahead with its plan to build an office tower above its iconic Herald Square store, and is now offering to put $235 million into improving the surrounding area as it seeks approval.

The company first floated the idea in 2019 of building an office tower at the flagship, releasing early renderings that showed a 1.5 million-square-foot skyscraper climbing 700 to 950 feet tall with a sky lobby.

Macy’s CEO Jeff Gennette said the company is ready to move forward with its proposal, which requires a land-use review by the city, Bloomberg News reported.

“We’re ready to put this in front of the community,” he said. “It was something that we explored really over the last four years.”

Macy’s said the planned overhaul of its flagship store will generate $269 million in tax revenue for the city annually, and contribute $4.3 billion in economic activity each year.

The plan is to keep the store open throughout the project. Macy’s presented its plan to investors in February 2020 right before the Covid-19 pandemic shut down the city. The retailer saw net sales fall 30 percent last year, but sales have started to recover.

Office developments on the West Side like Hudson Yards and Manhattan West, meanwhile, have been able to successfully draw office tenants. And the state is proposing a plan that would pave the way for 10 new buildings around Penn Station, just a block from the Macy’s store.

Other projects in the city have ponied up for public improvements in order to gain zoning approval. JPMorgan, for example, agreed to contribute more than $40 million for upgrades to public spaces as part of the redevelopment of its headquarters at 270 Park Avenue.

And Howard Hughes Corp. has offered to invest in the South Street Seaport Museum and make improvements to public spaces as part of its proposal to build a residential building at 250 Water Street.