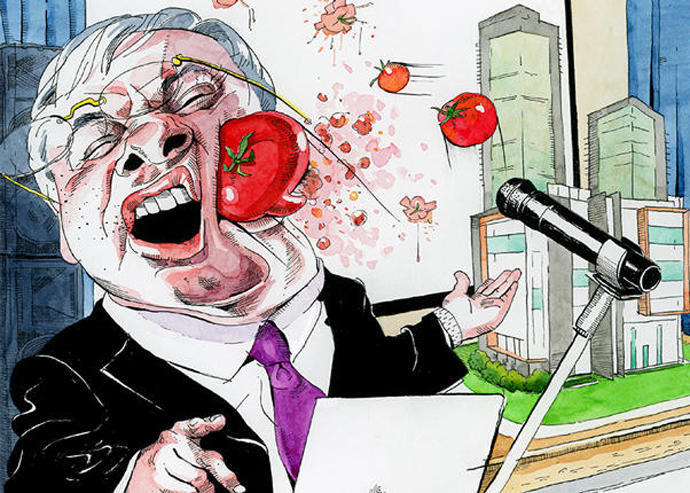 Manhattan Community Board 2’s land use committee meeting in April was jam-packed.

Attendees filled the NYU Silver Center classroom to the point where dozens of people were standing for a discussion about plans to build a hotel next to the historic Merchant’s House Museum in the East Village.

At one point, the museum’s executive director, Margaret Halsey Gardiner, got up to express her objections to developer Kalodop II Park Corporation’s proposed project on East 4th Street, which would take about two years to complete.

Gardiner told the committee she feared construction of the eight-story hotel would cause physical damage to the museum — one of the first 20 buildings in Manhattan given landmark status in 1965.

One frustrated attendee in favor of the project reportedly booed her, and several friends and community members later told Gardiner that the heckler was none other than New York City parking mogul Gary Spindler, Kalodop’s president.

“We sat respectfully at that meeting and heard everybody out and stayed throughout the whole meeting,” he told The Real Deal.

While accounts of what happened differ, the April meeting shows how high tensions can run when a developer proposes a project and runs into sharp resistance from a community board — often the first level of local government to weigh in. On paper, the boards have an advisory role on real estate projects, which means their ability to block or overhaul the process is limited. But developers still need to appear before them for any project that requires a zoning change, while some also choose to do so for as-of-right projects to help get the word out and keep the peace.

And resistance from community boards often precedes opposition from government officials with more power. After Community Board 2 rejected the required zoning change for Kalodop’s hotel in June, for instance, the City Council unanimously voted it down in September — effectively putting an end to the company’s initial vision for the project.

The developer can still build an as-of-right project at the roughly 3,600-square-foot site, but it will have to max out at six stories instead of eight. Gardiner said she was happy with the downsizing and stressed that the controversy wasn’t personal, describing Spindler as a nice person and neighbor who lives across the street from her.

“He wants to build an eight-story hotel, and I don’t want the Merchant’s House to collapse,” Gardiner said. “So his engineers say, ‘no problem,’ and our engineers say, ‘problem.’ The fact is, there is a problem.”

Brooklyn Community Board 9 fiercely rejected controversial plans to redevelop Crown Heights’ Bedford-Union Armory last summer during a meeting filled with activists and residents up in arms about the project. Manhattan Community Board 3 has long had concerns about Michael Stern’s planned 79-story rental tower at 247 Cherry Street — at a community meeting about the project Stern attended in 2016, one attendee angrily labeled him a “greedy corporate fuck.”

And at Gary Barnett’s Central Park Tower, where sales launched in October, Manhattan Community Board 5 rejected plans to cantilever the skyscraper over a landmarked art school back in 2013 amid accusations that the developer had been a bad neighbor and standoffish about the project.

A TRD analysis of Department of City Planning data found that community boards across the five boroughs have rejected about 60 of just over 1,000 applications in the past three years. While that figure may seem low, it doesn’t capture the whole picture. Not every application filed with City Planning made it to the boards for an initial vote, though many of the projects received negative responses from the community early on. Additionally, the number of rejections per year has steadily risen since at least 2015, the data shows — a sign of growing reluctance among the boards to accommodate developers. A handful of the proposed projects have since been altered.

Manhattan’s 12 community boards proved to be the most resistant to land use applications, with 26 rejections since 2015, while the three on Staten Island were the most accepting, with just three rejections over the same period.

But the broader relationship between developers and community boards can be tricky to characterize, since each neighborhood and each project is different.

Robert Perris, district manager of Brooklyn Community Board 2, said that since his board covers Downtown Brooklyn, its members are getting tired of seeing requests for megaproject after megaproject.

“Right now, we’re having a fairly strained relationship with developers,” he said, “because they’re asking for increased density and other changes at a time that a lot of people in the community are having a very visceral bad reaction to what’s already being built.

“Historically, we haven’t really been a NIMBY board,” Perris added. One of the board’s latest skirmishes was with Alloy Development over its controversial two-tower project at 80 Flatbush in Boerum Hill. Perris did give the firm credit for meeting with the community board early on and frequently throughout the development process. However, that wasn’t enough to prevent the board from opposing the mixed-use project based largely on its height, he noted.

“There was an immediate reaction to the fact that the buildings were taller than anything else,” Perris noted, saying Alloy’s perspective was that “from a distance, tall buildings are just tall buildings, and up close, you mostly just experience the first four or five floors.”

Josh Brown, co-chair of the Housing and Land Use Committee at Brooklyn Community Board 4, which covers Bushwick, said he and his colleagues have been increasingly inundated with requests to hear about new projects, much as in Downtown Brooklyn.

Some developers realize this and approach the community board early in the process — even if they’re working on an as-of-right project and don’t need the board’s approval, he added.

One project the board dealt with this year was Camber Property Group’s planned rental building at 1601 DeKalb Avenue. The project would span about 110,000 square feet with 120 units, and the board voted not to approve it based largely on concerns from nearby loft residents that it would block the natural light coming into their building.

Brown said he was skeptical about how seriously City Hall takes rejections and recommendations from community boards. He maintained that New York City is primarily focused on generating revenue, so if a developer has enough money to pay for the required permits and taxes, it’s likely the project will get approved regardless of the community board’s stance.

But while the Alloy and Camber projects are moving forward, both will include significant changes in line with what the community boards wanted.

Camber has repositioned its building on DeKalb to allow natural light to make it into the loft buildings. The project will now also be entirely below market rate, which was not the case prior to the board’s vote. Camber has since received all necessary approvals for it and plans to start building late next year.

“The fact that Community Board 4 voted the project down caused a lot of sleepless nights — we take it very seriously,” said Camber principal Rick Gropper.

“You can’t always do everything that the community board wants or that all the [residents] want,” he added, “but in this case, we were able to come up with a project that’s ultimately going to be better for all the stakeholders involved.”

The City Council, meanwhile, unanimously approved 80 Flatbush in late September, but only after Alloy shrank the tallest tower from 986 feet to 840 feet.

David Schechtman, an investment sales broker at Meridian Capital Group, said he thought 80 Flatbush “sailed through” the approval process — despite the community board’s opposition and the reduction in size. It wasn’t surprising the project ended up being shorter, since developers often know they’ll need to make compromises, he added.

“I think it’s custom and practice for them to go in asking for even more than they expect to get with the understanding that, even if it’s just optics, there are going to have to be concessions and scalebacks,” Schechtman said.

Perris of Brooklyn Community Board 2 said some residents wish the City Council had made 80 Flatbush even smaller, but he argued that community boards have the best shot at influencing projects when they make clear and specific recommendations.

Oftentimes, that isn’t the case, he maintained.

“I think a lot of community boards sort of vote things up or down without much explanation for their thinking,” the district manager said, “Now, NIMBY is a legitimate response to things, but it can also be a knee-jerk response.”

One of the greatest power imbalances between developers and community boards, he added, comes down to information — it can be hard for boards to make solid arguments about the size or scope of a development without knowing as much about it as the investors behind the project.

“We’re never able to say, ‘Oh, well, at that rate of return, you really should be making this project 15 percent smaller,’ because we don’t know that,” Perris said in reference to all of the city’s community boards.

Broadly speaking, developers can take two approaches to working with community boards, said Eli Weiss of the New York development firm Joy Construction: They can view them as annoyances to be avoided, if possible, or as potential assets and information sources that can help improve projects.

“At the end of the day, they’re your neighbors, and development projects don’t take six weeks,” he said. “So you’re going to be in their community for a year, and these are stakeholders and influencers and people who are going to be involved. Why not show them the respect that you would any neighbor?”

Several developers said they go to community boards even if they are working on as-of-right projects and pointed to instances where the boards gave them advice that they used to improve their projects.

At Joy Construction and Maddd Equities’ 484-unit, five-building Webster Commons project in the North Bronx, for instance, Weiss said community members were concerned about parking, so they made sure to include plenty of spots in the development. The project is in Bronx Community Board 12’s territory, and district manager George Torres said the developers had been fairly easy to work with — though that’s not the case for all companies.

“A lot of times when we tell developers that they have to do certain things to get our approval, some of them just don’t do it, knowing that, in many cases, we just play an advisory role,” he said.

Camber’s Gropper said his firm usually waits until it has a good sense of the local politics and what it wants the project to look like before approaching the neighborhood’s community board. But he stressed that Camber does its best to approach the city’s boards for most of its projects to develop a good rapport with local residents who could work on and live in the property.

“In our experience, going to the community board and presenting a project — even when you don’t have to — can ultimately result in a better outcome for everyone involved,” he said.

But Kalodop’s Kramer said his experience with Manhattan Community Board 2 for the proposed hotel on East 4th Street was less productive, which he blamed mostly on the museum. He claimed the organization’s employees spread misinformation about the project, although his firm tried to set the record straight.

“When you have a conversation with a neighbor who is so dramatic, it’s hard to bring some sanity to the process,” said Kramer, who noted that he served on Manhattan Community Board 4 from 1984 to 1997 as vice chair and later chair of the waterfront committee. The Merchant’s House Museum “never had any desire to work with us,” he added.

Kramer said Kalodop tries to work carefully with community boards, but he stressed that the hotel project was a tougher sell than it should have been.

“This particular one was not a great moment for city planning or elected officials or the community board,” he said.