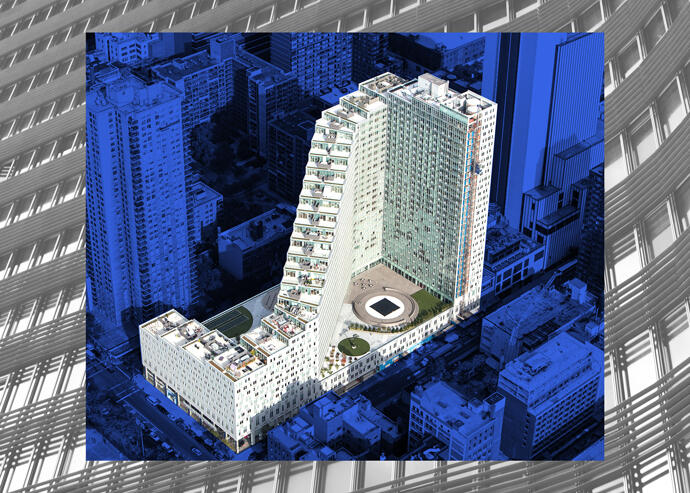 Nab this rent-stabilized penthouse for $8K per month A penthouse in Mercedes House, the 31-story luxury building that snakes across a block in Hell’s Kitchen, would set you back $8,000 per month — but the rent can’t go up much from there.

A lawsuit filed by a limited liability company, MH 770-54th Street, alleges that the tenants of PHE, a two-bedroom apartment at the luxury building, stopped paying rent last April, and now owe nearly $100,000. According to the lawsuit, they have a preferential rent of $8,000 per month, just below the unit’s legal, stabilized rent of $8,214.

Rent-regulated luxury units are an oddity. The aberration at Mercedes House, a project of Two Trees Development, is thanks to the 421a tax break.

The program gives developers property tax abatements for up to 25 years on new residential projects that set aside 25 to 30 percent of the units as affordable rentals. Developers can set their own initial rent for the market-rate units. But under the law that provides the tax break, affordable and market-rate units alike are rent-stabilized for as long as the abatement continues.

The 421a program closed in 2019, extending a final round of benefits to properties that began construction before 2016. Mercedes House, which was built in 2009 and began leasing in 2011, got in under the wire. (A new version of the abatement, called Affordable New York, is now in effect.)

Mercedes House started receiving 10 years’ of benefits in 2014, according to the Department of Finance.

Thanks to another quirk of New York rent regulation, the price of the unit is unlikely to go much higher in the near term.

Before the 2019 rent law overhaul, apartments could be deregulated if their rent exceeded a certain threshold. In 2015, lawmakers set the limit at $2,700 a month, an amount that would increase with the Rent Guidelines Board’s annual hikes. If a unit asking more than that figure became vacant, it could be brought out of regulation. That also applied to units with tenants who earned more than $200,000 in consecutive years.

The 2019 law tossed out high-rent and high-income deregulation. But the rent board’s increase for one-year leases was zero last year and is typically 2 percent or less, meaning the tenants of Mercedes House apartment PHE will enjoy a few more years of regulated rents — at a luxury price.