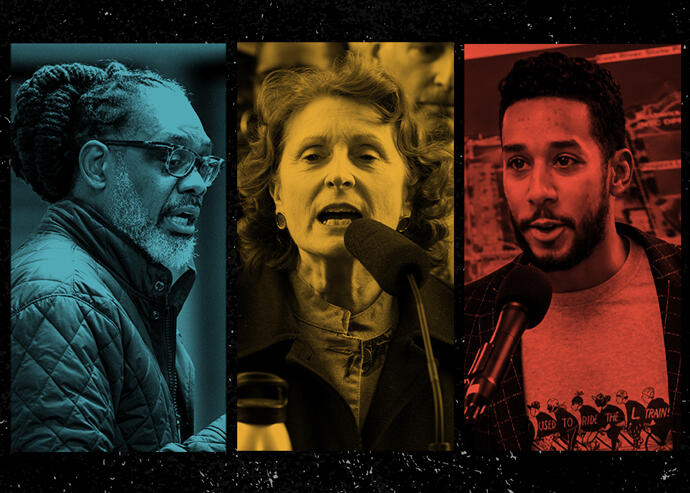 Elections should be easy for single-issue voters: Pick whoever’s best on your top concern and fill in the bubble.

But if your issue is housing supply and you live in Brooklyn, fuggedaboutit.

The leading candidates for Brooklyn borough president all seem hostile to the obvious fact that adding housing increases affordability. Or, worse, they understand supply and demand but are more interested in votes.

A caveat: Favoring development and winning elections are not mutually exclusive. Far from it. Polls show most New Yorkers want more housing and consider it a high priority.

But the loudest voices are the ones opposing development in their neighborhood or demanding the power to decide what can be built there, which tend to be unrealistic proposals that never happen and would not meet the dire need for housing anyway.

The strongest three candidates’ platforms and histories provide little confidence that they would make new housing a priority if they win the June 22 Democratic primary, which is tantamount to election.

One, City Council member Robert Cornegy Jr., is actually more pro-business than most elected Democrats in the city. He is the only candidate in the race who supported Industry City’s proposed commercial rezoning.

But his website refers to “nefarious” and “corrupt” landlords, “unscrupulous property owners,” and makes the dubious claim that the pandemic exacerbated Brooklyn’s shortage of affordable housing. (Rents actually fell because demand plummeted.)

On the plus side, Cornegy’s site says he would “rezone higher-income neighborhoods to allow the construction of affordable housing and homeless shelters.” But the very next sentence is: “Every community must do their part to support housing for New Yorkers.”

Every community — yet he would only rezone high-income ones.

Upzoning only rich neighborhoods will not solve the city’s affordable housing problem. But that is also what candidate Antonio Reynoso supports. The City Council member killed a rezoning of his district before it even began the public review process, ensuring that when the city comes back, newcomers will displace his Bushwick constituents rather than move into the new housing that he could have allowed.

Yet Reynoso’s website says we need to “finally solve our affordable housing problem.”

And what is the problem in Brooklyn? According to Reynoso, “the actions of those who pursue greed over the common good.”

Greed is a pejorative way to describe profit motive, which drives the economies of the world’s richest nations. Blaming “greed” is a crutch for elected officials who cannot come up with policies that improve capitalism without dismantling it.

Human nature is not going to change. What can change are the rules that channel it into productivity that benefits society.

Reynoso and Cornegy both say they would reserve public land for affordable housing only — a standard position among lefty politicians in the city. But that would prevent mixed-income housing from being built on underutilized New York City Housing Authority land.

It would also forbid projects such as BFC Partners’ Bedford Union Armory, where 150 market-rate units will subsidize 150 affordable ones (renting for $521 to $1,166) and a community center with $10 monthly memberships for locals.

Cornegy and Reynoso both voted for the rezoning that allowed the armory project. Now they are saying no to market-rate units at city-owned property such as the armory.

Pro-housing voters who take them at their word might move on to the candidate running third in the polls, Assembly member Jo Anne Simon. But Simon is more anti-development than both of them.

To take just one example, she fought a residential tower Alloy Development planned for 80 Flatbush Avenue, claiming it would be “overwhelming” and add far more housing than the old zoning allowed “for no reason that seems justified.” The reason was to create hundreds of affordable homes.

Simon also predicted 80 Flatbush would “further displace the African American community in the area, which has already suffered significant displacement.”

Replacing a government building, kickboxing studio and three market-rate apartments with roughly 860 homes (200 affordable), as 80 Flatbush will do, will not displace people. It will house them.

What does displace people is not adding enough housing during an economic boom like the one that created nearly 1 million jobs in New York City.

Low-scale Boerum Hill, where Simon once ran the civic association, added very little housing during that time. So those new workers and their families fanned out across the city, bidding up housing prices and causing the displacement that everyone decries. The economics are pretty straightforward.

Simon might say higher density would be inappropriate for rowhouse-dominated Boerum Hill. But she has also been frosty on the Gowanus rezoning, which would add 8,500 dwellings, 3,000 of them affordable. As borough president, she would have a formal say on all land-use applications in the borough. It’s a scary thought.

No information about this appears on Simon’s campaign website, which offers only a single sentence about her housing agenda: “Jo Anne knows Brooklyn needs housing within reach of everyone — development that reflects, uplifts and strengthens ALL of our diverse neighborhoods.”

Wishing for housing doesn’t make it happen. But fighting it is worse.

One surefire way to stop rental housing from being built is to implement universal rent control, as Reynoso wants to do by enacting “good cause eviction.” Forget, for the moment, that only the state, not the borough presidents, could do that. Instead, think about whether developers would build condos or rentals if rent increases were limited to barely above the rate of inflation.

Where does this leave the pro-housing voter? There are three other candidates, all long shots: Khari Edwards, Kimberly Council and Mathieu Eugene.

Eugene might be the most unaccomplished City Council member ever. Edwards seems earnest and hardworking — as are Cornegy, Reynoso and Simon, by the way. And Edwards’ website is blessedly free of anti-housing rhetoric. But it does not say how he would actually solve the housing problem.

Kim Council only supports rezonings for projects in which at least 60 percent of units are affordable. Indeed, her entire housing policy would depend on government subsidies. That’s like setting off for the moon with half a tank of fuel. The launch might be spectacular, but the outcome would be catastrophic.

Which, from a housing voter’s perspective, is a pretty good metaphor for this race.