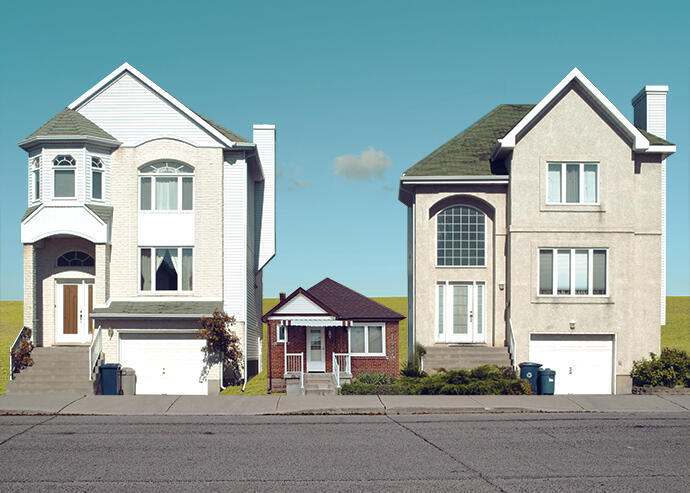 Hauppauge neighbors are perturbed by a small house under construction on an undersized lot. (Getty, Photo Illustration for The Real Deal)

A tiny house on a little lot is causing a big to-do in Hauppauge.

Neighbors of a 1,310-square-foot home going up on South Plaisted Avenue say a variance that allowed construction on the approximately 6,000-square-foot lot is upending their lives — literally, Newsday reported.

Gail Castoro, a retired marketing underwriter who lives next door, said her fireplace mantle started to lean after construction started.

The property’s former landowner, William Mallon received variances from Smithtown’s appellate zoning board to build on the lot, which is about 35% smaller than zoning requires. The board also approved a 25-foot frontage reduction, planning department staffers told Newday.

Castoro said the allowance means the property’s door opens “practically on my driveway.”

Neighbors who maintained the lot throughout its vacancy assumed the space was legally unbuildable. Most homes in the area are at least 2,100 square feet and on plots with at least a third more land.

“I’m just very disappointed with the town that they would approve such a tiny house in such a nice, middle-class neighborhood,” said Lauren Kubernat, who lives across the street from the home.

Smithtown fields an average of 210 requests annually for residential and commercial variances. Zoning board of appeals member Tony Tanzi said the area has very little buildable land left. The dearth prompts applications from owners looking for exceptions to the rules.

Town inspectors had issued a stop work order after finding the South Plaisted Avenue home’s foundation was too high, Newsday found in town records. Builders took a week to shave off a foot of foundation, creating noise and dust, neighbors said. The stop work order was lifted April 26.

The land-use lawyer who represented Mallon last year before the town said his client went through all of the appropriate steps to get his permit approved.

“It’s not like he did anything he shouldn’t have done,” said Trimarco.