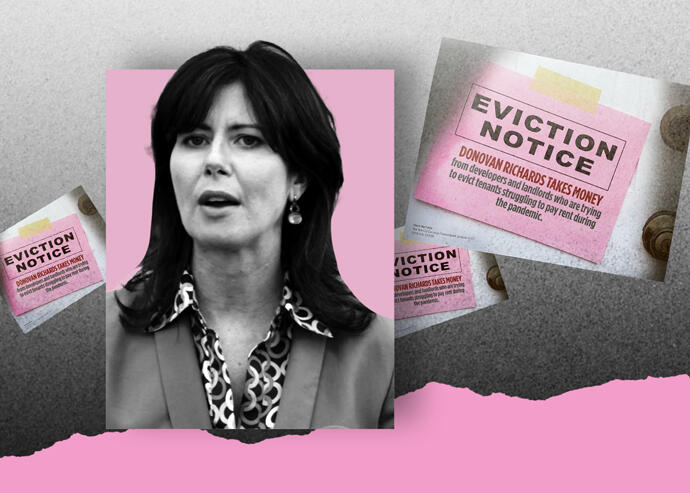 The mailers, which show a pink eviction letter taped to an apartment door, take a swing at Borough President Donovan Richards, who is running for re-election.

“Donovan Richards takes money from developers and landlords who are trying to evict tenants struggling to pay rent during the pandemic,” the notice reads.

But one critic said some tenants would not pick up on that message.

“If you’ve ever faced eviction you know that the idea of losing your home is terrifying,” Assembly member Catalina Cruz, who has had that experience, told Patch. “To think that this is something that’s acceptable to use for political gain is disgusting.”

Cruz, who is backing Richards, added that the notices could be even more confusing to constituents who don’t speak English.

“Even if people eventually realize that it’s not a real eviction notice, the fact that you scared the bejesus out of them — was it really worth it for a vote?” Cruz said.

Richards, who does not endorse the “cancel rent” campaign and has called development important to the city’s economy, has received ample support from the real estate industry, among others. The Real Deal reported last year that Richards returned as much as $21,000 to real estate donors who surpassed the threshold for individual contributions.

Shock mailers are not a new tactic, especially for underdog candidates, but Crowley’s campaign surely expected her eviction mailer would be controversial. The neighborhoods that received notices — Jackson Heights, Elmhurst and Corona — were among the areas hit hardest by the pandemic. All are lower-income communities of color where residents face a heightened risk of losing their homes once the eviction moratorium lifts.

The notices “reek of privilege,” said Cruz, who represents the targeted neighborhoods.

“If supporters of Donovan Richards are upset that Elizabeth is pointing out the fact that he takes contributions from developers, they should ask him to refuse all these contributions so they know unequivocally whose interests he is looking after as borough president.”