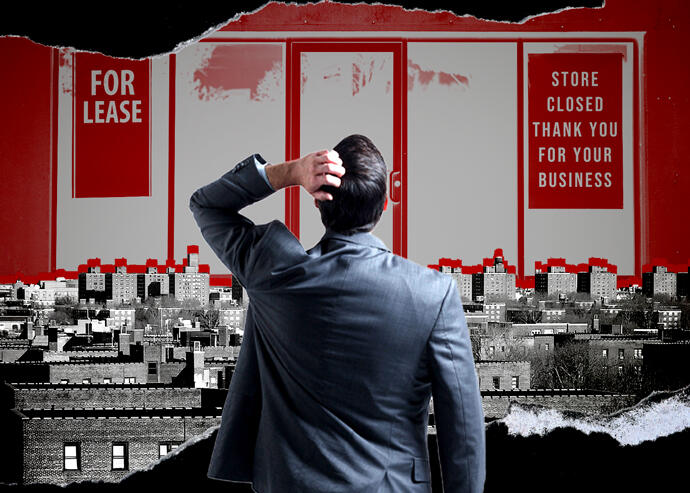 At least 65 commercial spaces are labeled as vacant as of March. (Getty, iStock)

But while the New York City Housing Authority’s footprint is large, commercial spaces, including retail, make up a relatively small portion of its square footage. NYCHA has approximately 2.5 million square feet of non-residential space dedicated to community uses throughout its portfolio, according to the agency. There’s around 230,000 square feet of retail space.

A public records request filed by The Real Deal found that the housing authority’s buildings are home to hundreds of commercial spaces, at least 65 of which were labeled as vacant as of March.

However, usage restrictions, vacancies and complicated application procedures have left experts wondering whether NYCHA sees these spaces as an opportunity for revenue generation — something the beleaguered agency desperately needs — or as an afterthought.

“In a way, the sky’s the limit, in terms of how NYCHA can use the retail space that it has to promote economic opportunity with this population,” said Luis Henriquez Carrero, Director of Litigation at Manhattan Legal Service. “So to the extent that it’s not doing that at all, it’s a real problem.”

According to a NYCHA spokesperson, the retail spaces within its properties are intended to generate revenue for the agency. They’re home to different types of businesses — laundromats, mini-marts, barber shops and the like. Stores vary in size from 400 to 10,000 square feet and the going rent for a space is typically market rate.

The vacancy rate for all NYCHA retail space in the second quarter is 7 percent, according to the agency, with vacancy rates typically fluctuating between 5 and 11 percent. For community spaces, the current vacancy rate is 15 percent, which is comparatively static.

And like many landlords across the city, the pandemic has resulted in a steep drop in revenues. In 2020, the agency received $4.6 million from commercial leases, down from $6.2 million in 2019, according to a NYCHA spokesperson.

A 2015 report noted that NYCHA has a “sound, established practice for leasing its rentable retail space,” but those looking to fill its spaces haven’t always found that to be the case. Arthur Kats, director of the Microenterprise Project at Volunteers of Legal Service, a nonprofit that provides pro bono legal services, said that while working with a client looking to lease a NYCHA retail space, some properties listed as vacant would be unavailable for rent, for reasons that weren’t always clear.

In buildings that are undergoing Rental Assistance Demonstration conversion, a process that allows a nonprofit or for-profit entity to own and manage the property, NYCHA is holding off on both new leasing and lease renewals, which means some spaces will remain vacant for years. NYCHA ultimately plans to convert nearly a third of its public housing stock — about 62,000 apartments — to private management.

It is unknown how many commercial properties RAD will impact, but the developers who come on to manage the property will be responsible for finding new tenants, who should be “in line with the needs of the resident population.”

But there are also restrictions on usage that limit which businesses can open — which could also deter profitable tenants from renting the spaces. Bars, liquor stores, art galleries and pawn shops are wholly prohibited from NYCHA properties, while restaurants may only open in certain spaces where they’ve been grandfathered in. Some spaces for rent note that they may not be used for groceries or delis, but no reason is given as to why.

Those restrictions may be inconsistent with NYCHA’s goals, experts say. Limiting grocery stores, for example, poses a problem in food deserts. A 2016 report by the Manhattan Institute found that 180 of NYCHA’s properties are located in areas classified by the city as “underserved,” or having less than three square feet of supermarket floor space per capita. Some large NYCHA properties are located more than half a mile from the nearest supermarket.

Some experts also believe NYCHA could do more to encourage entrepreneurship among its residents, who are not given priority among lease applicants. The authority requires lease applicants to have experience running a business and cash on hand, along with the ability to pass a credit check and a background check.

“It goes back to the question of what is NYCHA’s goal with this space,” Henriquez Carrero said.

The housing authority is in dire financial straits, with about $40 billion needed to bring its portfolio up to a state of good repair, and its capital needs growing by about $1 billion each year. But it’s unclear if, or even how, retail fits into that. A 2020 “Blueprint for Change” compiled by the agency lists different ways of raising capital (including RAD conversions), as well as ways to bring more jobs to NYCHA residents, but retail isn’t mentioned once.

Louis Flores, a member of the activist group Fight for NYCHA — which primarily works to protest RAD conversions — said that he believes that those commercial spaces should be rented out to businesses that will serve residents’ needs, such as internet cafes, after-school programs or small business incubators. Though the advocacy group does not support profit-making from public assets, he too is uncertain about NYCHA’s intention with their commercial spaces.

“I doubt that NYCHA is even trying to make money from that space … if it was, it would be one of the options that it would be talking about for raising money for NYCHA,” Flores said. “They’re not even talking about using retail to help bail out some of the public housing developments.”