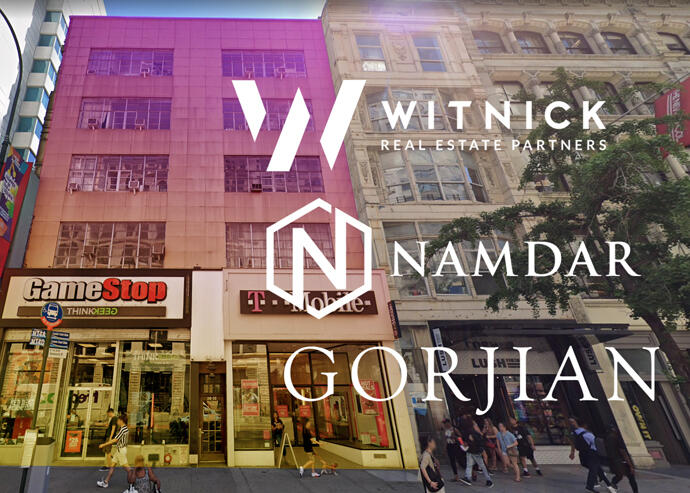 The Dushey Family, who own the discount chain store Shoppers World, and the Dadon Family have sold a 20-unit apartment building in the West Village for $23.5 million.

The buyer is Witnick Real Estate Partners, Namdar Realty Group and Gorjian Real Estate Group, who took 60 percent, 30 percent and 10 percent ownership stakes in the building, respectively. They did not respond to requests for comment.

Long Island–based Namdar is best known for owning malls, having quietly assembled a huge portfolio of them across the country — some of them not in the best shape.

The West Village property, at 30 East 14th Street, is a walk-up apartment building above two commercial storefronts — GameStop and T-Mobile. It was purchased for $3 million in 1990 by Sion Dadon from Jack Dushey. The property was managed by the Jenel Management Corporation, which is owned and operated by the Dushey family. Samuel J. Dushey and David Dushey had a collective 10 percent ownership in the East 14th Street address.

A month later, Shaul Dadon sued his father for allegedly terminating his employment at Dadon Realty in retaliation for Shaul’s siding with his mother, Hana Dadon, in his parents’ divorce. Shaul Dadon also alleged that he owned a 39 percent stake in the East 14th Street building and his father was allegedly withholding his monthly ownership fees. Sion Dadon disputed all claims and alleged that his son was embezzling money from Dadon Realty Group.

Both lawsuits were settled in 2019.