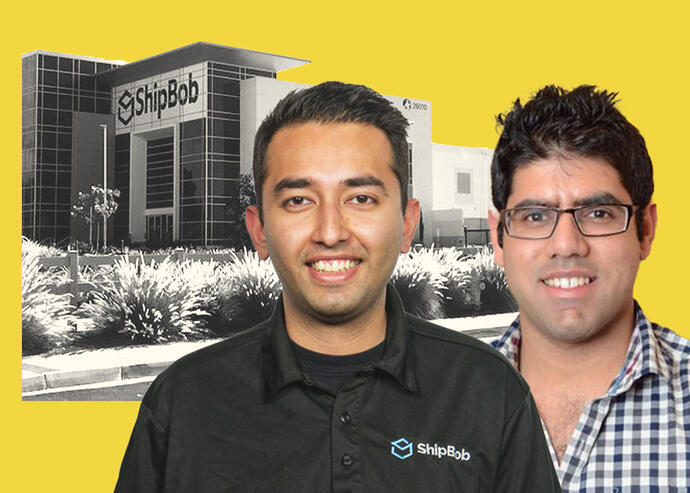 ShipBob, a logistics company that provides shipping and delivery services for e-commerce companies, raised another $200 million in funding, taking the company to virtual unicorn status.

The Chicago-based firm raised the money in a rare Series E round led by Bain Capital Venture, which has been investing in the 7-year-old business since 2017. Softbank, Menlo Ventures, Hyde Park Venture Partners, Hyde Park Angels and Silicon Valley Bank also participated in the round that pushed ShipBob’s valuation to $1 billion.

The funding comes only nine months after ShipBob – which means “Bends Over Backward for SHIPping” – secured $68 million in a Series D round led by Softbank’s Vision Fund 2. All rounds have raised $330.5 million, the company said.

“This is one of the milestones in a long journey ahead of us,” Chief Executive Dhruv Saxena said in an interview. “While it feels amazing to have gotten to some scale that allows us to have this valuation, in the grand scheme of things this is still Day One. It still feels like we’re just scratching the surface.”

ShipBob, like a number of shipping-oriented businesses, saw explosive growth last year, powered by the abrupt shift to online shopping and delivery as the pandemic kept consumers hunkered down in their homes, ordering online. At the beginning of 2020, ShipBob had roughly 1,200 customers. By the end of the year, that stood at more than 5,000, Saxena said.

“Our peak season is Black Friday and Cyber Monday and the holidays,” he said. “We saw that start in April and continue through the remainder of the year. We were a beneficiary of that accelerated e-commerce growth and I haven’t seen that growth go away in 2021.”

Saxena said many of his customers are growing rapidly and he’s adapting the company to keep up while expanding ShipBob’s software offerings to stay ahead in what is becoming a very competitive third-party logistics sector.

“The fastest growing e-commerce brands recognize that world-class fulfillment increases revenue and builds customer loyalty,” Ajay Agarwal, a Bain partner and early ShipBob board member, said in a statement. “These leading brands are partnering with ShipBob as the one-stop cloud logistics platform to manage and deliver their merchandise to customers around the world.”

Saxena said the company posted its first profit last year but doesn’t expect to be profitable this year as he and co-founder Divey Gulati expand the company throughout the U.S., Europe and Australia. ShipBob’s proprietary software is deployed in 24 fulfillment locations, 20 in the U.S., and one each in Canada, the U.K., Ireland and Australia.

It plans to expand to 35 fulfillment centers – most are about 110,000 square feet – through a franchise program with existing warehouses, many already in the works. Of the ones in operation today, ShipBob owns and operates four. Much of the growth will be focused on the U.S. and Europe.

Saxena would not disclose how much cash flow the company generated last year but said the $68 million garnered in last year’s Series D round was still in the bank.

“The incremental capital is adding more fuel to our growth,” he said. “We may choose to not be profitable this quarter or for the next few quarters. We want to make these investments to grow and add capabilities on that benefit our merchants.”

That includes expanding through business-to-business shipping rather than just consumers, a move he hopes keeps customers as they expand into major retail stores.

As for taking the firm public, a typical step after so many series funding rounds, Saxena said it’s not on the table. Yet.

“It could be the next big milestone but it’s not something we are super focused on in the near-term,” he said. “We don’t need more capital to continue with our growth plans.”