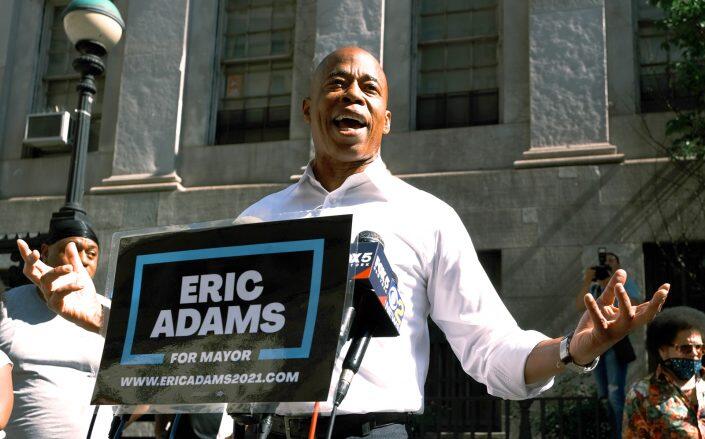 The real estate industry’s bet on Eric Adams has paid off.

The Brooklyn borough president clinched the Democratic primary for mayor late Tuesday when a count of absentee ballots pushed him above 50 percent of the vote, including spillover votes from rivals in New York’s new ranked-choice voting system.

Adams was heavily supported by business interests, and real estate in particular. However, that was not the primary reason he won, nor does it mean he will be in developers’ pockets when he takes office in January: His campaign platform calls for “aggressive” housing construction, but he has also blamed development for increasing rents in communities of color, excoriated Brooklyn developers and recommended slashing the height of proposed towers that were opposed by NIMBY groups.

In 2018, he proposed landlords be monitored in the same manner as criminals.

Adams, 60, still has to beat Republican nominee Curtis Sliwa in November, but that will not be a competitive election. Sliwa, the founder of the Guardian Angels, has primarily been a media personality over the years, not a civic leader or serious contender for elected office.

Adams, by contrast, has been systematically building his political résumé for more than 25 years, beginning with his co-founding of 100 Blacks in Law Enforcement Who Care in 1995. During a 22-year career in the NYPD, he rose to the rank of captain despite being a public critic of department policies.

His moderate politics and law enforcement background were crucial to his victory in the June 22 primary, in which he defeated former Sanitation commissioner Kathryn Garcia, former de Blasio administration counsel Maya Wiley and 10 other contenders for the nomination.

Rising crime during the pandemic became an issue in the race, giving the former police officer and supervisor an advantage over Wiley, who proposed cutting the NYPD budget by $1 billion.

But Adams, the Brooklyn-born son of a house cleaner and a butcher, was also seen as someone who could navigate the tricky balance between maintaining law and order civil liberties: He talked frequently during the campaign about opposing stop-and-frisk and about being beaten up by a cop as a teenager and joining the department to reform it from within.

Adams led with 30.8 percent of the vote after the first round of ballot counting, in which only No. 1 choices were tallied. Wiley — the left-leaning candidate most feared by real estate interests — was second in that initial count with 21.3 percent, followed by Garcia with 19.6 percent.

After eight rounds of counting, in which the last-place finisher’s No. 2 votes were reallocated in each round, Adams had a majority of votes: 50.5 percent to Garcia’s 49.5 percent. But the race was not close until that final tally. After seven rounds, Adams was at 40.5 percent, Garcia at 30.4 percent and Wiley at 29 percent.

Real estate interests also delivered financial backing to Ray McGuire, whose investment banking background and lack of political experience were major handicaps during the race, and to Shaun Donovan, a top housing official in the Bloomberg and Obama administrations, who never gained traction with voters. Lack of charisma was a problem for both candidates.

That was not the issue for the fourth-place finisher, Andrew Yang, but he lost momentum after leading the race early. Wiley’s main competitor on the left, Dianne Morales, saw her campaign implode because of a campaign staff revolt.

City Comptroller Scott Stringer, an early favorite in the race, campaigned against developers’ tax breaks but was already struggling with voters when sexual harassment allegations derailed his candidacy.

Adams was a Democrat for most of his life but took a detour as a registered Republican from 1997 to 2001. He left the Police Department and won election in 2006 to the state Senate, where he often clashed with his more liberal colleagues. In 2013, he was elected Brooklyn borough president, all the while planning to run for mayor in 2021, when term limits forced him and Mayor Bill de Blasio from office.