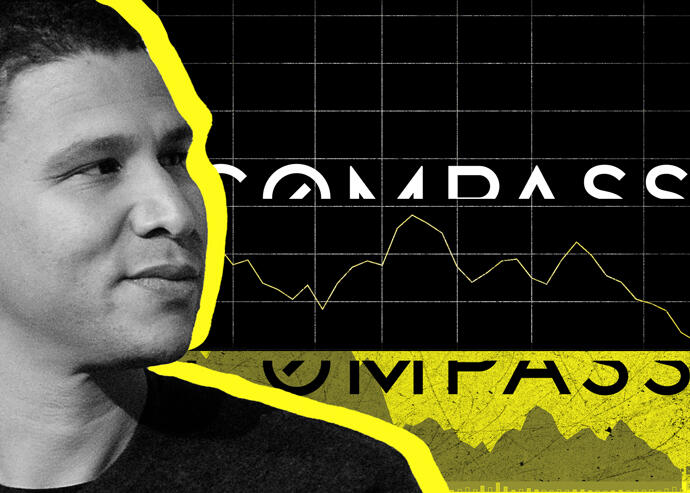 It took Compass just three months as a public company to lose more than $3 billion of market value.

The stock closed at $12.25 on Wednesday, a new low that gave the company a market value of $4.7 billion. That’s a drop of 39 percent from its starting price of $20.15 at its April 1 debut on the New York Stock Exchange. At that price, the company was worth about $7.8 billion.

Investors who bought at the IPO price before the stock started trading paid $18. Investors who bought shares prior to the IPO have restrictions on selling them until Sept. 28, when the so-called lockup ends. That’s about 95% of the outstanding shares, according to Jason Helfstein, managing director at Oppenheimer & Co., which has an “outperform” rating on the company. Helfstein said he views the price drop as a function of a lack of trading liquidity ahead of the end of the IPO’s lockup period.

“Even if somebody did want to buy the stock, it’s very hard to buy the stock in the open market right now,” he said. Compass’ average daily trading volume is 791,817 shares. Helfstein said it’s common for a company’s share price to fall as the lock-up date approaches and the stock typically rallies after the lock-up period ends.

Still, some analysts and investors are skeptical about the business model Compass has used to fuel its rapid growth, by aggressively recruiting top brokers from competing firms. Analysts have about an equal mix of buy and hold recommendations on Compass.

“You have to ask yourself, ‘Is this a fundamental problem with the business or is this a stock trading issue?’ We think this is a stock trading issue,” Helfstein said. “If the stock still cannot work [after the lock-up period ends] then maybe the company will have to figure out a way to cut expenses and push themselves to profitability.”

Collectively, investors are short 6.37 million shares as of the close on July 7, accounting for 2.86 percent of the traded float and 1.62 percent of all outstanding shares.