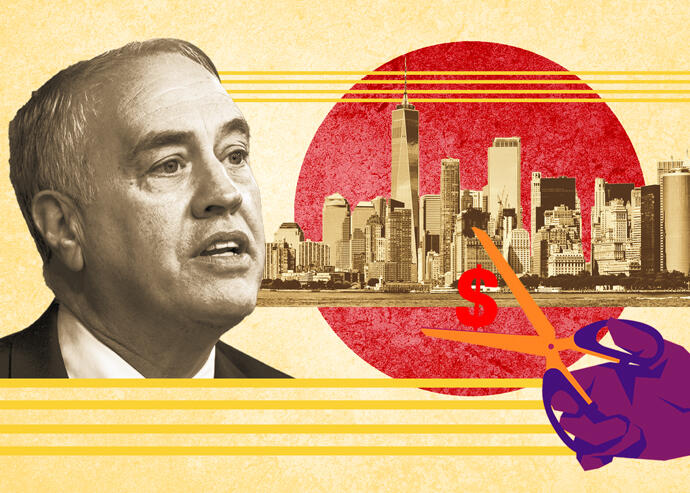 The pandemic’s impact on the New York City office market remains unrelenting, according to figures from the state comptroller.

The market value of office buildings in the city dropped by $28.6 billion — 16.6 percent — during the last fiscal year, per the report from State Comptroller Thomas DiNapoli. That marks the first decline since at least 2000.

In the previous fiscal year, the total market value of office properties in the city reached $172 billion.

Other indicators from the second quarter tell the story of the pandemic’s crippling effect on the office market. Asking rents averaged $70.26, below the $72 average seen by each of the last five years. The office vacancy rate hit a 30-year high of 18.6 percent, easily outpacing the 15.2 percent rate at the end of 2020.

Among the city’s three major business districts, Midtown South is showing the least amount of resilience. The average asking rent has declined more than 10 percent since the first quarter of 2020, while the vacancy rate has soared 9 percent. In Midtown and Downtown, asking rents are down between 3 and 4 percent, while the vacancy rate has increased between 6 and 7 percent.

The city stands to lose about $1.7 billion in property tax revenue during the current fiscal year, more than half being driven by the loss in office building values.

Some of the city’s most expensive properties have taken massive hits in the wake of the pandemic. The World Trade Center’s market value has dropped 23.1 percent during the pandemic, per the comptroller’s report, and other buildings stand to lose at least 10 percent of market value, including the GM Building, the Bank of America Tower and the Solow Building.

Amid the uncertainty over the future of the city’s office market, recent weeks have presented glimmers of hope.

Google last month shattered a pandemic record with its purchase of St. John’s Terminal in Hudson Square for $2.1 billion. The sale was the biggest of an office building in the United States since the pandemic began.

In a report released late last month, Cushman & Wakefield predicted a migration back to the office beginning in the first quarter of 2022. The study cited vaccine mandates and the leveling off of Delta variant infections in the coming months as encouraging indicators for back-to-office deadlines finally happening.

“Most businesses are hoping to get back as soon as possible,” David Smith, a co-author of Cushman’s study, told TRD’s Akiko Matsuda. “Based on surging tour activity, we know demand is there — so it’s not a matter of if office buildings will re-populate, but when.”