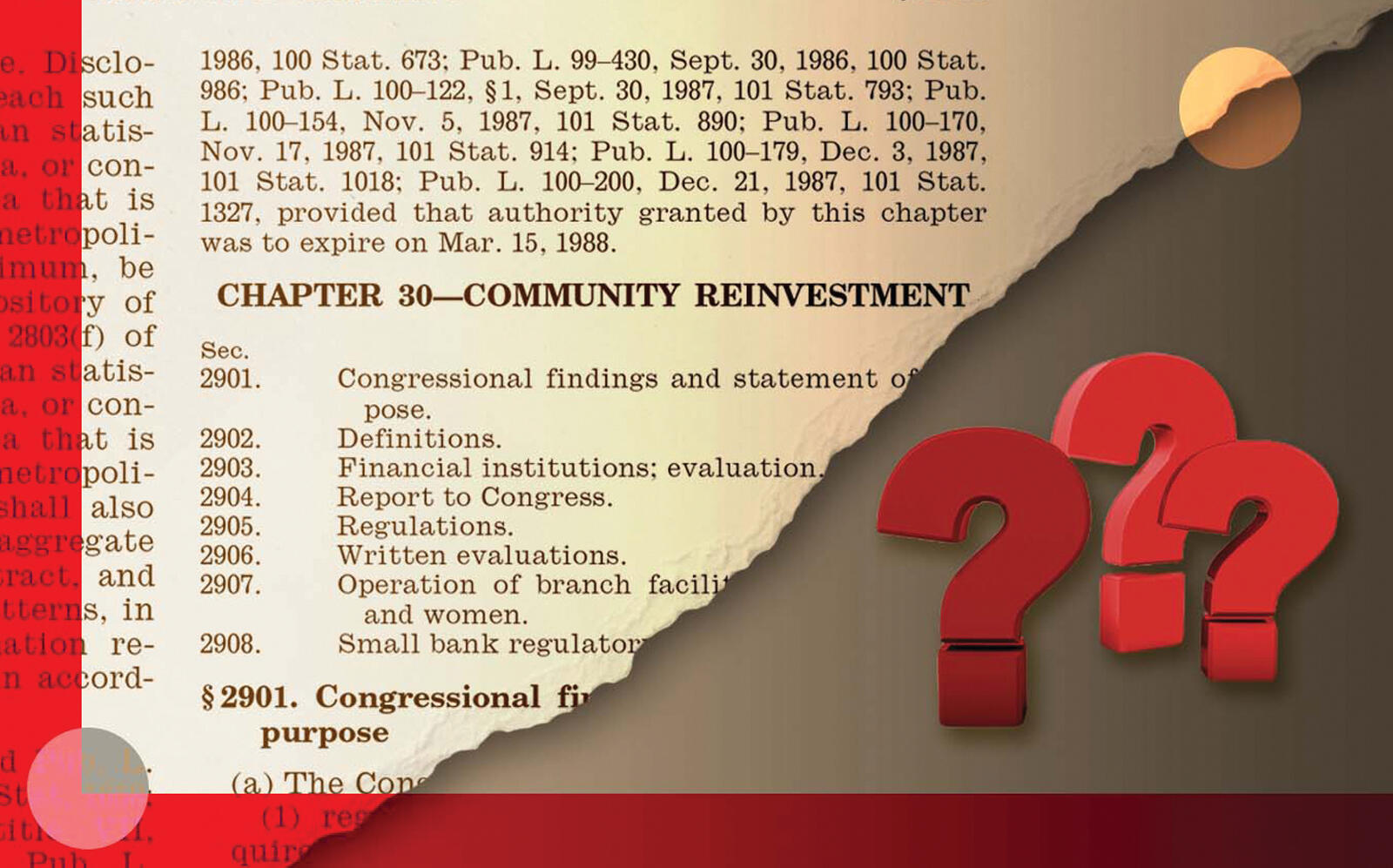 When Trump-appointed regulator Joseph Otting, previously a career banking executive, proposed a series of overhauls to a 1970s redlining law last year, critics viewed it as a giveaway to the banking industry.

If that was the aim, it backfired.

Banking interests and community advocates united in their opposition, with the latter filing a lawsuit to block the reforms from moving forward. Since proposing the changes, Otting has stepped down as comptroller of the currency, and in September, his successor announced that federal officials would rescind the new rules and reinstate a version adopted in 1995, with an eye on modernizing the law through a different process.

Under the Community Reinvestment Act of 1977, commercial banks are rated based on how well they meet the credit needs of the neighborhoods they serve. Lenders receive credit under the law by providing financing for affordable housing, community services for low- to moderate income individuals, economic development and other activities. Poor performance could stand in the way of a bank’s ability to pursue mergers or acquisitions.

The law is a key driver of affordable housing construction. An estimated 85 percent of annual low income housing tax credit equity investment is driven by the CRA, according to the Affordable Housing Investors Council. Surveys of financial institutions over the years have indicated that the main attraction of housing tax credits is CRA compliance.

“​​I often refer to it as the most important law that nobody knows about. It really helps to leverage a lot of capital for community development purposes,” said Carolina Reid, associate professor of city and regional planning at the University of California, Berkeley. “We would not have nearly as much affordable housing.”

Though Otting’s changes are being discarded, federal regulators must now grapple with how to modernize the law to address the proliferation of nontraditional lenders, as well as the fact that the measure, created to combat discriminatory lending, does not explicitly address race.

There are also some aspects of the 2020 changes that banks would like to incorporate in future reforms, including clearer rules on the types of privately financed affordable housing that qualify for CRA credit.

“That absence of clarity has been a problem,” said Benson Roberts, president and CEO of the National Association of Affordable Housing Lenders. “If a bank can’t have some certainty, then it is less likely to go the extra mile to do that deal.”

The CRA was passed in 1977 to prevent banks from refusing to lend in or near communities of color, a practice known as redlining. The law applies to all institutions insured by the Federal Deposit Insurance Corporation.

The measure was last updated in 1995 and came under attack in the wake of the 2008 financial crisis, with some conservatives blaming the regulations for encouraging irresponsible lending. That theory was dispelled by the federal Financial Crisis Inquiry Commission, which found that only 6 percent of subprime loans issued to low-income borrowers were connected to the CRA.

“What the OCC was proposing was a complete destruction of atoning for the sins of redlining,” said Josh Silver, a senior policy advisor at the National Community Reinvestment Coalition, one of the groups that sued to prevent the new rules from being implemented.

Some of the proposed changes included allowing lenders to receive credit for financing large-scale infrastructure projects. They would also permit activities in Opportunity Zones, a program that has been criticized for incentivizing investment in luxury housing rather than low-income communities.

“We were deeply concerned that affordable housing and other high-value community development activities could lose out to lower-value activities,” Roberts said. “A bank could fill up its balance sheet with activities that meet the requirements of the OCC rules but don’t address a community’s needs.”

But Kenneth Thomas, president of Miami-based Community Development Fund Advisors and a former professor of finance at the University of Pennsylvania’s Wharton School, argues that the new rules shouldn’t be abandoned completely.

He pointed to a change that would have required lenders to invest in communities where they source 5 percent or more of their retail domestic deposits. The current requirements under the CRA are based on physical bank locations, which has led to an influx of financing in cities that are hot spots for lenders’ headquarters, like Salt Lake City.

“This is like throwing the baby out with the bathwater,” Thomas said.

Warren Traiger, an attorney at Buckley LLP who focuses on CRA compliance, said the question of how to address the proliferation of internet-based banks has been a driving force behind calls to modernize the law.

“You have very significant banks now that have few or no traditional brick-and-mortar branches,” he said.

But the OCC’s 5 percent rule failed to garner support from stakeholders, with some arguing that the threshold would lead to only meager increases to investment in neglected areas.

“The advocacy groups did not like it, and neither did the industry,” Traiger said. “The challenge would be to design a rule that brings CRA activities to deserts and does not make the problems of hot spots worse.”

Traiger said some changes that were included in the 2020 rules could be reintroduced, including bars on getting CRA credit for issuing loans to high-income individuals or for taking over a CRA-qualifying loan.

The OCC, FDIC and Federal Reserve are now working together to “develop a consistent framework across all banks that encourages higher levels of responsible lending, investments, services and greater community engagement,” the OCC said in September.

Questions remain about how the law should address the growth of nonbank lenders. Some states, including Massachusetts, Illinois, New York and Connecticut, have their own statutes on the books. In Massachusetts and Illinois, credit unions and mortgage companies are subject to CRA requirements. The New York Legislature recently passed a measure that will force mortgage banks to abide by the CRA, though it awaits the governor’s signature. Such changes on the national level would require Congressional action.

Hope Knight, president and CEO of the Greater Jamaica Development Corporation in Queens, noted that simply updating the geographic requirements would not wholly address the needs of communities.

“I think in underserved communities, businesses tend to be smaller, they don’t have access to relationships with traditional financial institutions,” she said. “With the emergence of more significant fintech, the geographic footprint can be elusive. There needs to be some understanding that underserved people need to have access to physical branches.”

In January 2020, the New York-based Association for Neighborhood Housing and Development submitted comments calling out the OCC’s changes for neglecting to address race.

“There are no ideas proposed to increase access to banks and banking for people of color, no ideas to minimize displacement among these populations, and no attempt to strengthen the fair lending portion of CRA exams,” the group wrote.

Roberts noted that the 2020 changes included CRA credit for nonsubsidized affordable housing, and would like to see that replicated in future reform to the law. Overall, however, there seems to be some consensus that the law needs to better reflect the realities of 21st-century banking.