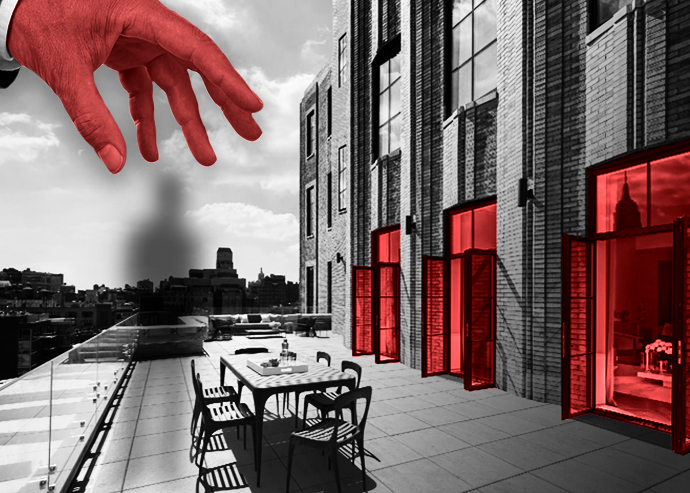 The penthouse at Walker Tower — seized by federal agents five years ago in connection with an international money laundering scandal — is once again the center of controversy.

The condo board of the luxury building at 212 West 18th Street is asking a New York Supreme Court judge to eject owner Ron Vinder, a private wealth manager at Morgan Stanley, and award the board immediate possession of his unit after accusing the government of bungling its sale last summer.

Central to the board’s complaint is the fact that the U.S. Marshals Service sold the penthouse to Vinder at a 64 percent discount off its previous purchase price. The board argues that it would never have approved such a low sale and that the transaction violated the building’s bylaws, which gives the board first right of refusal on any sale.

“The board is simply exercising its fiduciary responsibility to preserve the value of residences throughout Walker Tower,” said the board’s lawyer, David Berkey of Gallet Dreyer & Berkey, in a statement. He called the Marshals’ sale of the penthouse “illegal.”

Vinder’s lawyer, Marc Kasowitz, sees it very differently. He called the complaint “completely meritless” and accused the board of trying to overturn the sale out of retaliation after “unsuccessfully attempting to extort” his client.

The dispute is the latest episode surrounding the sprawling penthouse. The trophy apartment first gained notoriety in 2016, when U.S. Marshals seized it from its first owner, Emirati businessman Khadem al-Qubaisi, as part of a probe into U.S. assets purchased with funds stolen from a taxpayer-funded Malaysian investment vehicle known as 1Malaysia Development Berhad, or 1MDB.

Al-Qubaisi had purchased the penthouse for $50.9 million in 2014, a then-record sum for a downtown Manhattan residence. When the government sold it last year, it went for $18.25 million.

The jaw-dropping 64 percent discount shocked residents and market insiders, raising questions about the handling of the sale by the government and the unit’s listing agents, Emily Beare and Shaun Osher of CORE Real Estate. Notably, the condo board said that higher offers for the unit existed. Compass agent Michael Graves told The Real Deal earlier this month that he made a $20 million all-cash offer for the unit in March 2020.

Officially, the pandemic’s devastating effect on the city’s residential market as well as the unit’s deterioration — evidenced by cockroach sightings and a lingering odor — were cited as reasons for the low price, according to court documents.

Last summer, Walker Tower’s condo board tried to block the sale in federal court by exercising its right of first refusal, but the government successfully argued that the board signed away its rights months earlier, when it gave consent for the government to unilaterally sell the unit.

Though the board appealed the decision, by the time the case was heard by appellate judges in July, the sale had been closed for nearly a year.

“You didn’t get a stay of that [sale] and the transaction is closed,” said Paul Watford, an appellate judge on the panel hearing the case, which ultimately dismissed the appeal. “What can we do?”

The appellate judges concluded in July that any relief must be sought in state court, which provided an opening for the condo board to try again to undo the sale, according to Berkey, the board’s lawyer.

Later that month, the condo board passed resolutions declaring the government’s sale void and agreeing to pursue legal action to eject Vinder and his family from the penthouse. Berkey filed the board’s complaint with the state Supreme Court and the board stopped accepting Vinder’s monthly common charge payments, though it’s now seeking a court order to resume collection.

“Any board would be expected to take the same kind of action,” said Allan Ripp, a spokesperson for the condo board. “It’s not personal. It has nothing to do with this buyer. It’s really the process that was done improperly.”

Ripp said the responsibility lies with the government, which did not accept other bids at “substantially higher prices.”

“There was no reason for a fire sale of this trophy apartment,” Ripp continued. “The government has explaining to do.”

But neither the Marshals service nor the Justice Department is a party to the board’s lawsuit against Vinder, which his lawyer, Kasowitz, argues is “what can only be described as an ill-conceived, if not frivolous attempt” to avoid federal court.

“It is just beyond credibility that this board in these circumstances is continuing to try to undo the transaction,” said Kasowitz, who filed a motion to dismiss the case last month. “We can’t help but believe this is some personal effort on behalf of some members of the board to harass Mr. Vinder but that effort will not succeed.”

In his motion, Kasowitz accused the condo board of attempting to extort $1 million from Vinder to make up for the transfer tax the building would have received if the penthouse was sold at a higher price.

Ripp said the board has “zero animus” against Vinder and denied the accusations of harassment and extortion.

As the litigation continues, Walker Tower’s board is raising common charges. Last fall, the monthly dues went up 5 percent. This year, owners were informed fees would be rising a further 3.75 percent, according to documents viewed by TRD. The board denied the increases were connected to the penthouse dispute.

DOJ spokesperson Joshua Stueve declined to comment. However, when the government was still involved in the case back in July, DOJ attorney Barbara Levy told federal appellate judges that the board’s challenging of a closed transaction could have a chilling effect on forfeiture sales.

“It would be in derogation of public policy if finality were not achieved within the confines of the forfeiture process,” she said.