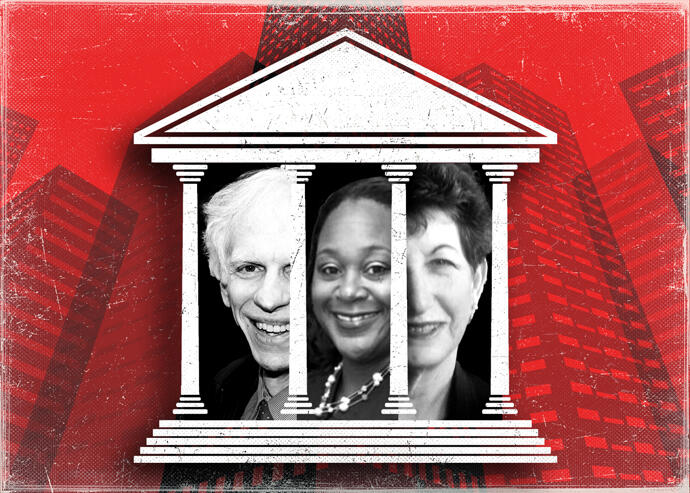 When big-time projects are stopped by small-time judges “These are huge towers. I’ve lived in the city my whole life. You can’t just do this because the zoning allows it. I just can’t believe this is the case.”

Early in my career, I wrote about the backroom dealmaking that produces state Supreme Court judges. Now, at The Real Deal, I see the havoc these jurists wreak on the city and its real estate industry. It compels me to revisit the tawdry topic of how they get to the bench.

New Yorkers might assume their judges are top-notch legal minds who have reached the pinnacle of the profession. Um, no.

Many were middling, undistinguished lawyers. You’d almost have to be to subject yourself to the shady, debasing process one must endure for a shot at holding the gavel.

State Supreme Court judges, who preside over cases big enough to matter to the industry, serve 14-year terms and make $210,900. That adds up to $3 million, not including pension benefits, potential future raises and any additional terms. Beats hustling for clients in the backwaters of Brooklyn or toiling away as a law secretary.

These robed men and women rule on high-stakes real estate disputes and rezonings for projects and entire neighborhoods. Lately, some of their key decisions have been reversed on appeal, which suggests they are not doing a bang-up job.

Take the quote above by Engoron, who ruled that four towers proposed by JDS Development, L+M Development, CIM Group and Starrett Corporation in the Manhattan neighborhood Two Bridges required a rezoning, even though they complied with the zoning in place. If that sounds like sound legal reasoning, I’ve got two bridges to sell you.

The developers appealed and won. The Appellate Division also overturned recent anti-real estate rulings at SJP Properties’ 200 Amsterdam Avenue and in Inwood, where a sweeping rezoning had been temporarily invalidated because Judge Verna Saunders decided the land-use review process should — for the first time in its 30-year history — have included a racial impact study.

“Part of [the Appellate Division’s] job is to clean up the crap from the trial courts,” said one judicial system veteran. “Frankly, there’s a lot of it.”

All three reversals were unanimous. Do the judges care about being overturned? One would hope. But the court system does not keep track of their reversal rates and their jobs are as safe as houses. They nearly always serve until they hit the mandatory retirement age of 70 (at which point they can request up to three two-year extensions).

Again, no. These judicial elections bear no resemblance to democracy. The Democratic county organizations nominate as many candidates as there are Supreme Court openings. If your ballot in Manhattan, Brooklyn, Queens or the Bronx says “vote for any six candidates,” there will be exactly six Democrats. In New York’s Republican counties, the GOP does the same thing.

“This is an insider game where it’s a question of who you know, not what are your abilities.”

Under the state constitution, this is a partisan process involving a judicial convention. The local political machines have the infrastructure to control it, rendering the annual convention a Soviet-style affair.

“The whole system is so wrapped up in politics and patronage, there’s no incentive for anyone to relinquish authority,” said Ken Fisher, a land-use attorney at Cozen O’Connor and former City Council member. “Absent some miraculous burst of civic leadership out of Albany, there’s no reason to think the system is going to change any time soon.”

A candidate for judge must round up support from party functionaries. In Brooklyn, 42 Democratic state committee members — known as district leaders — elect a county leader. To keep their loyalty, the county leader fills the judicial slate with candidates who have garnered the most support among them. Candidates win that support by attending district leaders’ fundraisers and writing checks.

That is why in any interview about judge-making in New York, the phrase “chicken dinners” will come up.

“The idea that you can attend a few chicken dinners … and that determines whether you’re deciding cases of consequence is terribly disappointing and unacceptable,” said Lincoln Restler, a City Council candidate who has tried to reform the system. “This is an insider game where it’s a question of who you know, not what are your abilities.”

“The process is bizarre,” said the court system veteran, who navigated it years ago and spoke on condition of anonymity to protect professional relationships. “Oddly enough, the system produces some very good judges, [but also] a lot of mediocre judges and some turkeys.”

Lawrence Knipel, for example, became a judge because his wife, district leader Lori Knipel, “bulldozed him through,” as the source put it. Fortunately, Knipel turned out to be one of the court’s best judges.

Noach Dear did not. The late former City Council member, who failed the bar exam repeatedly before getting an exemption to take it untimed, got his judgeship without ever having tried a case. It is not clear that he had even practiced law.

“It’s not that good judges don’t come out of the system. It’s that the system is not designed to produce the leading scholars,” said Fisher, who once sat on a screening panel created to ensure judicial candidates at least had basic qualifications.

“In the years when I was involved in vetting them, I don’t recall a single assistant district attorney, a single law professor, a single partner in a law firm to even inquire about doing it,” he said.

Candidates rejected by screening panels can still make it to the bench. Some of them just blow off the panels, calling them rigged.

Besides judicial incompetence, a second problem is influence. This is where real estate gets hurt. Judges who come through a political process do not get a nod from a political boss in the back of the courtroom, but they tend to be “more sensitive to public opinion, more sensitive to the feelings of the people they garnered support from,” said Fisher.

He was speaking generally, but a case he is handling bears mentioning. Fisher represents a group favoring the de Blasio administration’s Gowanus rezoning plan, which is being held up by Judge Katherine Levine because its public hearings would be held on Zoom.

Early in the case, which is itself being litigated on Zoom, Levine seemed to be just fine with virtual hearings. “That’s life,” she told opponents in January. “That’s Covid.”

But she has since pondered the matter long enough that the rezoning might not get done before the mayor and Gowanus’ two local City Council members leave office. That would seriously jeopardize its chances, potentially denying developers the right to build 8,000 apartments and 20,000 people the opportunity to live in them.

“The whole system is so wrapped up in politics and patronage,there’s no incentive for anyone to relinquish authority.”

Emboldened, opponents of a Bruce Eichner project in Crown Heights are suing on the same grounds. Levine is on that case too. The judge’s beef with Zoom endangers dozens of rezoning applications and billions of dollars’ worth of development.

As it happens, a politician whose Democratic club put Levine on the bench, Assemblywoman Jo Anne Simon, has demanded that the Gowanus rezoning be paused until in-person hearings can be held.

I’ve known Simon since she led the Boerum Hill Civic Association in the early 1990s. She later became a district leader and was considered a reformer. She would never call a sitting judge about an active case. Still, her connection with Levine undermines public confidence in the case.

“If the community is up in arms, opposing a development, does that impact judges? Absolutely. They are human beings,” a former Supreme Court judge told me. “But hopefully they are still ruling on the law.”

Judging by the reversals, some are not. While winning at the trial court matters, lawyers concentrate on getting all their evidence and arguments into the record because the appeals panel cannot consider new material.

Fisher is now less focused on swaying Levine’s decision than on simply getting her to make one. His enemy is time. Besides, as with most real estate cases, this one is likely to be decided by the Appellate Division.

By the way, appellate judges are also products of politics: They are picked by the governor, sometimes based upon who is whispering in his ear. But that’s a story for another day.