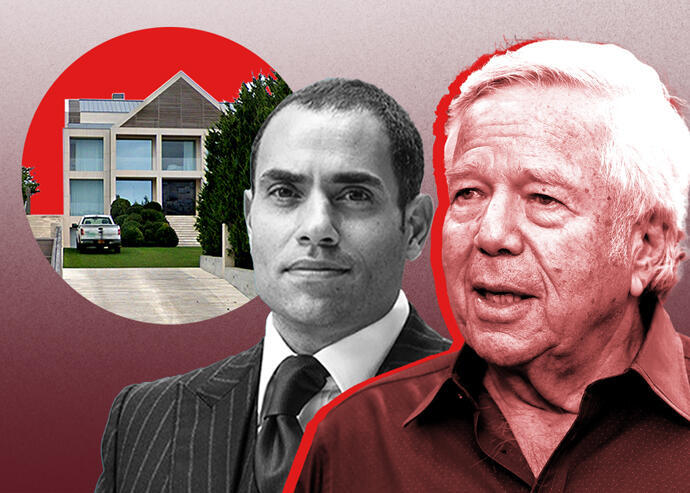 New England Patriots owner Rober Kraft purchased the estate at 40 Meadow Lane in Bridgehampton in an off-market deal for $43 million, according to the Wall Street Journal.

The property was at the center of litigation between Meir, who was previously a principal at HFZ, and the development firm’s founder, Ziel Feldman, along with the firm’s creditors.

The wealthy Fulton Cutting family owned the property — formerly home to a smaller cottage known as A Wee Lyr Mor — for decades, and listed it for $17.5 million in 2011. An LLC registered with HFZ’s New York office purchased the home for $10.5 million in 2013, records show.

The buyer then applied for a demolition permit to knock down the cottage and build a modern home, sparking pushback from neighbors and a lawsuit that temporarily stalled construction. The new home was eventually built in 2017.

Last December, an entity tied to the lender Monroe Capital filed a lawsuit seeking to eject Meir from the home. But he filed a countersuit in January, alleging that HFZ convinced the lender to participate in a scheme to fraudulently purport to “transfer” the property. Both complaints were discontinued in March.

The sale of the home was revealed in another lawsuit filed by a company tied to Yoav Harlap, an Israeli investor and one of HFZ’s lenders. The suit attempted to stop the sale of the home so that Harlap could collect on the proceeds to satisfy a debt. But the buyer of the home was not revealed at that time.
.
HFZ was once one of New York’s largest and most active condo developers, but now the company is battling liens, foreclosures, and numerous lawsuits.

A representative for Meir did not return a request for comment.