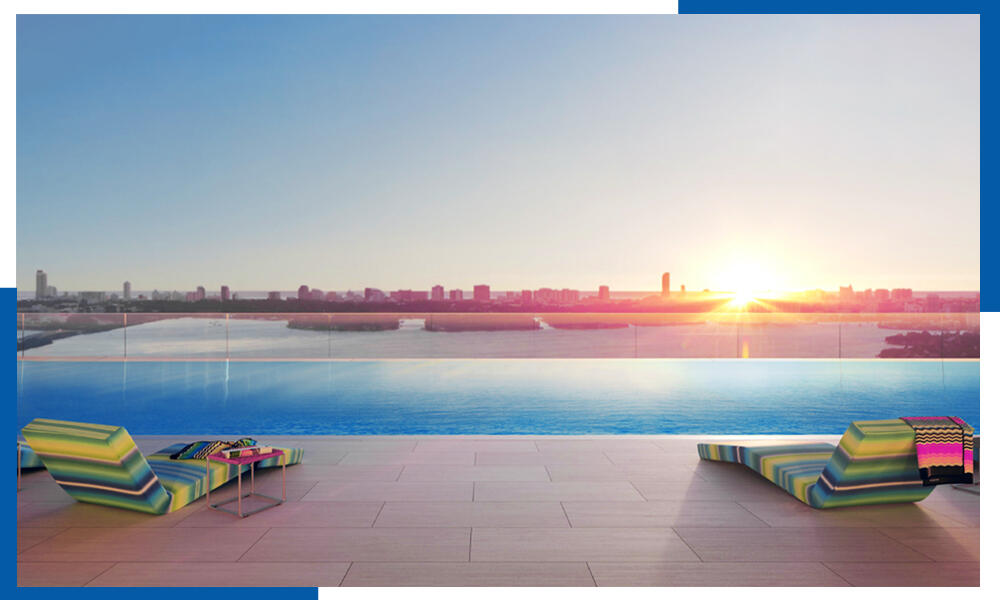 Missoni Baia, the highly anticipated 649-foot-tall waterfront condominium, is one step closer to completion. Located at 777 NE 26th Terrace along Biscayne Bay in the city’s Edgewater neighborhood, Missoni Baia is now topping off construction at 57 stories, with the majority of its 249 units already sold ahead of its projected completion later this year.

As the first and only Missoni-branded residential tower in the world, Missoni Baia is being brought to market by developers OKO Group and Cain International. The fashion house’s creative brand aesthetic, marked by eye-catching prints and Italian flare, can be found throughout the new 838,000-square-foot luxury tower.  The building itself was designed by architect Hani Rashid of Asymptote Architecture, with a richly layered landscape designed by Enzo Enea of Enea Garden Design.

Approximately $100 million in sales have closed at Missoni Baia since the start of the year and interested buyers are touring the property now ahead of its year-end opening.

The tower has seen a surge in domestic buyers, according to Vanessa Grout, CEO of  OKO Real Estate.

“In the past 12-18 months, single-family pricing has escalated drastically, and for this new wave of domestic buyers relocating to Florida, the maintenance of a single-family home can prove daunting,” Grout explained. “As a result, luxury condominiums like Missoni Baia are proving much more attractive, promising less maintenance costs and an abundance of resort-style amenities.”

Young professionals and growing families are among the buyers shopping for apartments now at Missoni Baia, Grout added.

Slated for completion at the end of 2021, Missoni Baia is delivering at one of the best times for Florida buyers, offering luxury at a moderate price point compared to similar buildings in nearby Miami Beach.

Priced from about $650,000 to upwards of $9 million, the one- to five-bedroom layouts measure between 776 and 3,788 square feet in size. Luxe interior features include 10-foot ceilings, terraces running eight-to-ten feet deep, impact-resistant glass windows and sliding doors and floor-to-ceiling glazing. The units come with marble-encased and mosaic-tiled bathrooms and all kitchens have custom cabinets and high-end appliances. Within and around the building, a 20,000-square-foot-plus amenity suite includes the city’s largest private spa with sauna, steam room and massage; multiple pools and poolside resident lounges, a bay-terrace lounge, resident game room, kid’s pool and play areas and pet spa.

Florida’s real estate market is only getting hotter. Newly-built residential property in the area jumped 36% year-over-year in April, hitting $505 million that month alone, according to Dodge Data and Analytics. Although new development has accelerated in recent years and is now reaching through South Florida’s districts to transform new neighborhoods, pricing for both single-family and condominium homes continues to climb.

“Miami has changed dramatically in the past 10-15 years with the rapid growth and densification of sub-markets like Brickell, Edgewater, Design District and Wynwood.  This will continue in the years to come as the city’s quality-of-life offerings become even more appealing and Miami grows as a hub for domestic business,” said Justin Oates, vice president at Cain International. “More recently, the pandemic has forced people to re-evaluate where they want to live and work and Miami has emerged as a top choice, bolstered by its pleasantly warm and business-friendly climate.”

Florida, as whole, offers zero state income tax and commercial real estate pricing for office space in Miami is a fraction of what it is in other popular gateway markets, such as Los Angeles and New York City, Oates noted.

Missoni Baia is OKO Group and Cain International’s latest residential tower in Miami. The team has another two developments under construction nearby, including Una Residences, a 47-story luxury condominium on the waterfront in the City’s South Brickell District, and 830 Brickell, a class A-plus office tower in the heart of Downtown’s Brickell Financial District – both designed by Adrian Smith + Gordon Gill. Additionally, OKO Group recently received approval to bring an Aman Hotel & Residences to Miami Beach’s Faena District.