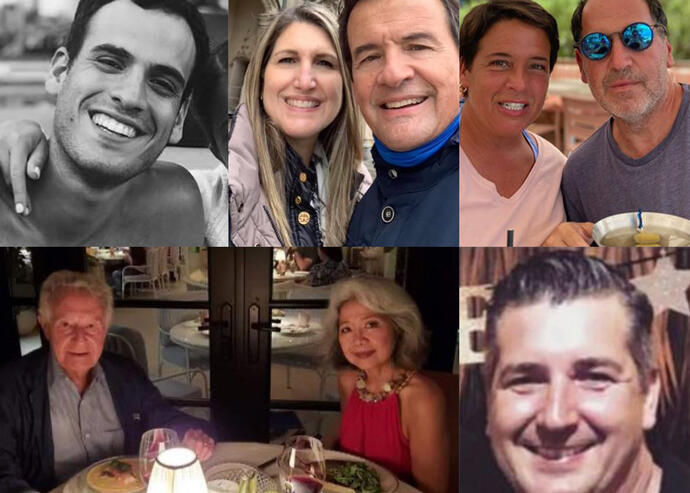 As heavy rains complicated the search and rescue operation for possible survivors of the Champlain Towers South collapse, family and friends of people believed to be trapped beneath the rubble stood by at a reunification site in Surfside on Thursday.

Maurice Waxman, whose friend Harry Rosenberg is among the 159 people still missing, said he’s still hopeful more survivors will be found, including Rosenberg. “It’s very easy to go negative, but never lose sight of hope,” Waxman said. “But the timeframe to dig them out is critical.”

Waxman said Rosenberg, a 52-year-old asset manager, relocated from Brooklyn to Surfside last year after his wife died from brain cancer. “He first rented an apartment on the fourth floor to see how he liked the building,” Waxman said. “He liked it so much, he bought a unit on the second floor a couple of months ago.” Miami-Dade County property records still show Rosenberg’s condo under the name of the previous owner and the sale has not been officially recorded. But Waxman said Rosenberg decided to move into Champlain Towers to get a fresh start on life after his wife died. “He loves the community down here,” Waxman said. “And he wanted to get out of New York.”

On Thursday, the death toll rose to four people after three more bodies were pulled from the rubble. One of the victims has been identified by her family as Stacie Fang, whose teenage son was pulled from the rubble on Wednesday and survived. Rosenberg’s daughter, Malki Weiss, and her husband, Benni Weiss were also among those still missing.

Mike Silber, Rosenberg’s nephew, said his cousin and her spouse had flown down from Brooklyn to spend a week with his uncle. Silber said he and others are frustrated that rescue crews did not immediately begin removing debris at the top of the rubble. “The reality is that not enough is being done,” Silber said. “I am not just speaking for my cousins, but the nearly 160 people. They deserve a chance to survive.” Videos released by the Miami-Dade Fire Rescue Department show that rescue crews began their search by entering the underground garage. More recent footage shows teams of firefighters climbing atop of the rubble to begin the process of removing debris.

The 12-story building had just begun the process for its 40-year recertification and was undergoing roof and other repairs, according to officials from the town of Surfside. More than half of the units in Champlain Towers South, the portion that collapsed, are gone. About 80 were occupied.

The first lawsuit was filed late Thursday against the condo association, seeking class action status and more than $5 million in damages.